How no good, terrible, very bad preauthorizations are killing medicine.

The Excitement of New Treatments Dampened

In July, I attended the American Headache Society (AHS) 61st Annual Scientific Meeting in Philadelphia. It’s a great meeting, and I encourage anyone with even a passing interest in the field of headache medicine to attend at least once—you’ll likely be hooked and make it an annual event. Always bursting with new science, this year’s AHS was, frankly, out of control. From start to finish, every session was crammed with data on amazing new treatments we have or soon will have to treat headache. From calcitonin gene-related peptide (CGRP) monoclonal antibodies and -gepants, to neurostimulators and -miditans—the heady glow of breakthroughs was as palpable as a carotid artery.

Yet, amid the enthusiasm, there was a grim murmur, dousing the flame of excitement: “Great! All these new drugs will need prior authorization, and my staff is overwhelmed as it is.”

The Rise in Prior Authorizations

How did prior authorizations (PAs) become such a burden? Present since the mid-1990s, PAs have become ever more burdensome. Over the last 10 years, the number of PAs has increased by 88%.1 A 2017 American Medical Association (AMA) survey showed 25% of physicians believed a PA led to a serious adverse event for someone in their care. Rated as burdensome and interfering with continuity of care by 85% of respondents, PAs were also believed by 91% to delay necessary care.2 It’s a pretty safe bet that 100% of practicing physicians believe the number of PA hoops they and their staff must jump through costs substantial time and money—both in short supply these days in most physician offices. The extra PA red tape is one of a mounting number of “modern medicine” irritants contributing to widespread physician burnout.

Prior authorizations are a utilization management process of insurers to determine if they will cover a particular (often expensive brand name) medication or procedure (again, the costly ones, such as MRIs). Insurers say PAs are a safety and cost-saving measure, but physicians know it’s really just the latter. The process may be cumbersome by design, anticipating doctors and patients alike will simply give up on requested medications and procedures and default to cheaper drugs or tests—even if it is not an optimal choice. Although this benefits insurers, it hurts patients and burdens physicians.

Although most often it is commercial insurers requiring PAs, the job is often outsourced to pharmacy benefit managers (PBMs) to do the dirty work. Invoking a reference to The Godfather, if insurers are Vito Corleone, BPMs are Luca Brasi.

In the US, we spent $550,000,000 on prescription medicine in 2019, up 54% since 2010.3 Seeing these staggering numbers, insurers, perhaps understandably from a cost-containment perspective, hire PBMs that exist solely to act as a middleman, negotiating drug prices among manufacturers, big pharmacies, and insurers. A supposed benefit is that PBMs strongarm pharmaceutical companies into lowering drug prices. Unfortunately, the price reductions benefit only the PBM, not the end consumer. Originally set up to control drug utilization and cost, PBMs are now incredibly effective at negotiating discounts and rebates that they keep for themselves.4 How the discounts are negotiated is proprietary, carefully guarded by the various players. These arrangements drive up out-of-pocket costs and copays based on a list price that may be vastly different from the price paid by PBMs and insurers. In some cases, PBMs push manufacturers to increase a drug list price in order to include it on a particular formulary. The power and clout of PBMs has grown, rising in parallel with profits (Table).3-5 In 2017 the 3 big PBMs grossed higher revenues than the largest pharmaceutical manufacturers, demonstrating their mammoth role in US health care. A recent analysis suggested that $1 in $5 (20%) of prescription drug prices is paid to a PBM.3 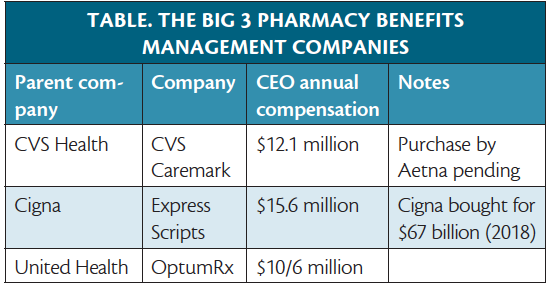 The Effect on Care

Approximately 66% of prescriptions rejected at pharmacies need a PA, and when PA requirements are imposed, only 29% of people receive the originally prescribed product; 40% abandon therapy altogether.2 This undermines quality care. It is also worth asking why we are spending staff hours on a process we never asked for that doesn’t benefit our patients or us.

Consider the person still having 10 disabling headaches per month despite treatment with topiramate and amitriptyline. Seeing the exciting data at the AHS meeting, you’d like to prescribe a monoclonal CGRP antibody. At the next visit, you queue up the prescription in your EHR and send it off. Next, a PA is sent to your office, and your staff has to fill it out and send it back, costing approximately $70. Streamlining, perhaps with a site like Cover My Meds (CMMs) might ease the burden. However, CMMs also receives funding from manufacturers, pharmacies, and PBMs. More than 500 EHRs, 62,000 pharmacies, and 700,000 providers use CMMs. Although CMMs may streamline work for in-the-trenches physicians, it is ultimately only simplifying an onerous and unethical process. In The Godfather parlance, CMMs is Tom Hagen, adding a lawerly hint of respectability to the Corleone crime family, efficiently enough that pharmaceutical distributor McKessen purchased CMMs for $67 billion. Notably, the CEO of McKesson recently reported pension benefits of $159 million, a record-setting amount for an executive of a public company in the US.4

The lack of transparency from manufacturer to insurer, PBM, and CMMs to what the consumer ends up with is mindboggling. The new monoclonal CGRP antibodies for migraine are widely available at no cost to patients now as manufacturers are in the drive-demand phase for these new treatments, but this won’t last forever. Eventually, the deep discounts will dry up faster than Lake Havasu, leaving those benefitting from them scrambling for coverage. Our staff will have more PAs that will increasingly be rejected as more obstacles are created (eg, patient must fail 4 classes of migraine preventives or prescriber must be headache medicine certified).

As I wrote this article, I received an unsolicted email from the National Board of Prior Authorization Specialists suggesting I “expand my health care career” by enrolling in their online Prior Authorization Certification Program—you can’t make this stuff up! For just $899 for the course plus $199 to take the certification test, I could “make more money, expand my career options in health care, and distinguish myself.”

This is where we need to pause, take a deep breath, and ask how we got here, who benefits from the PA process, and what can be done. Few would disagree that drug prices in the US are too high. We pay more for prescription medicine than any other nation, and prices are rising much faster than inflation. Are pharmaceutical companies to blame? Sure, but there’s plenty of blame to go around. The PBMs that benefit from high drug prices are at least equally responsible. We need to find ways to set reasonable limits on what can be charged, while still allowing pharmaceutical companies a free market ability to make profits, some of which they reinvest in innovation. As yet, there are no regulations for drug pricing in the US. Perhaps Amgen, the first company to submit CGRP monoclonal antibody data to the FDA, should have had to include a financial analysis of how much it cost to bring erenumab to the market, and how the company expects to recoup those costs. Laws that shine light on a murky PBM process would be welcome, and several states are pursuing this idea.

There is a push to adopt a standardized national PA process, which would save an estimated $6 per PA,6 but I’ve got a better idea: compensate physicians for the time it takes to file a PA—$40 should do it. A law requiring payment to medical practices for filing PAs would accomplish several goals. First, the number of medications and procedures requiring a PA would decrease if the companies demanding PAs (insurers and PBMs) had “skin in the game.” Second, the unreasonable financial burden of the process on physicians would be lessened. Third and most importantly, the end consumer, the patient, would benefit from increased access to medically necessary treatment and procedures, along with more attention from less burned-out physicians. Insurers, manufacturers, PBMs, McKesson/CMMs might see a dip in profits, but it won’t bankrupt them.

I’m not sure what will become of the National Board of Prior Authorization Specialists, although I suspect we can probably get by without them. You may remember that in The Godfather, Luca Brasi—the cold, unscrupulous enforcer—wound up “sleeping with fishes.”