Mr. D, age 59 and previously healthy, began having cognitive problems, including word-finding difficulty and increasing difficulty with crossword puzzles. His cognitive problems worsened slowly over 3 weeks, eventually progressing to aphasia and apraxia. Mr. D had not experienced any preceding trauma, headaches, or seizure-like activity. He was afebrile with no systemic signs of infection.

On neurologic examination, Mr. D was able to recall only 1 of 3 items at 5 minutes and had word-finding difficulties. No other focal findings were present and his laboratory results were unremarkable. Brain MRI revealed a large heterogeneously enhancing left temporal lesion with mass effect on T1-postcontrast imaging with significant surrounding vasogenic edema on fluid attenuated inversion recovery (FLAIR) imaging. (Figure 1).

Mr. D had a craniotomy with gross total resection of the enhancing lesion (Figure 2). The pathology of the lesion demonstrated a highly cellular mass composed of atypical cells with microvascular proliferation and necrosis. Cells were diffusely positive for glial fibrillary acidic protein (GFAP) and vimentin, S100, and focally positive for epithelial membrane antigen (EMA). The tissue was IDH-wild type (IDHwt), positive for MGMT promoter methylation. In regards to additional molecular markers, Mr. D had somatic mutations in STAG2, PTEN, TP53, TERT, and CDK4. He did not consent to testing for germline mutations. 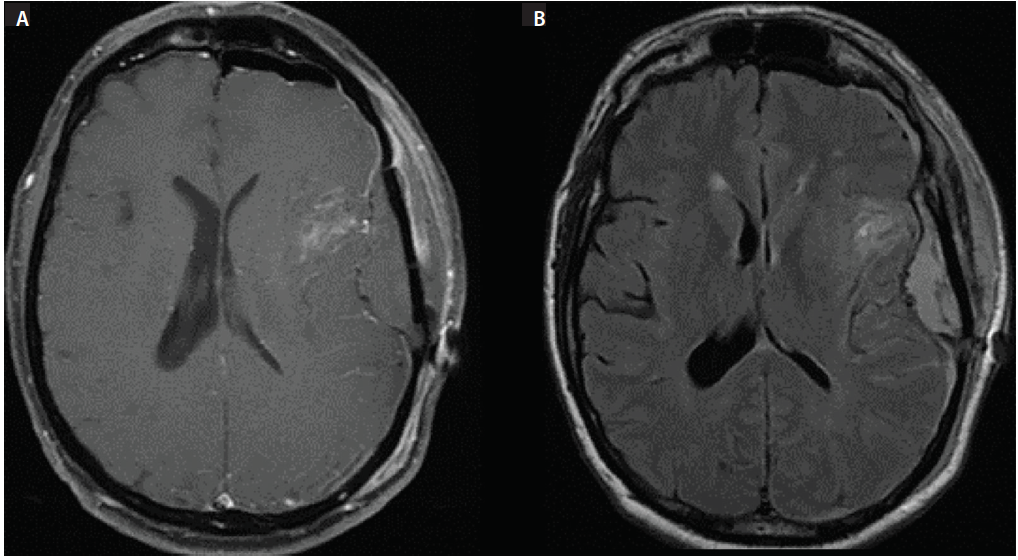 Although Mr. D received the standard-of-care treatment and had improvement of his neurologic symptoms, 6 months after the initial diagnosis, he began having seizures, progressive aphasia, and worsening right sided weakness. At this time, imaging (Figure 3) revealed an increase in the enhancement and FLAIR signal abnormality. 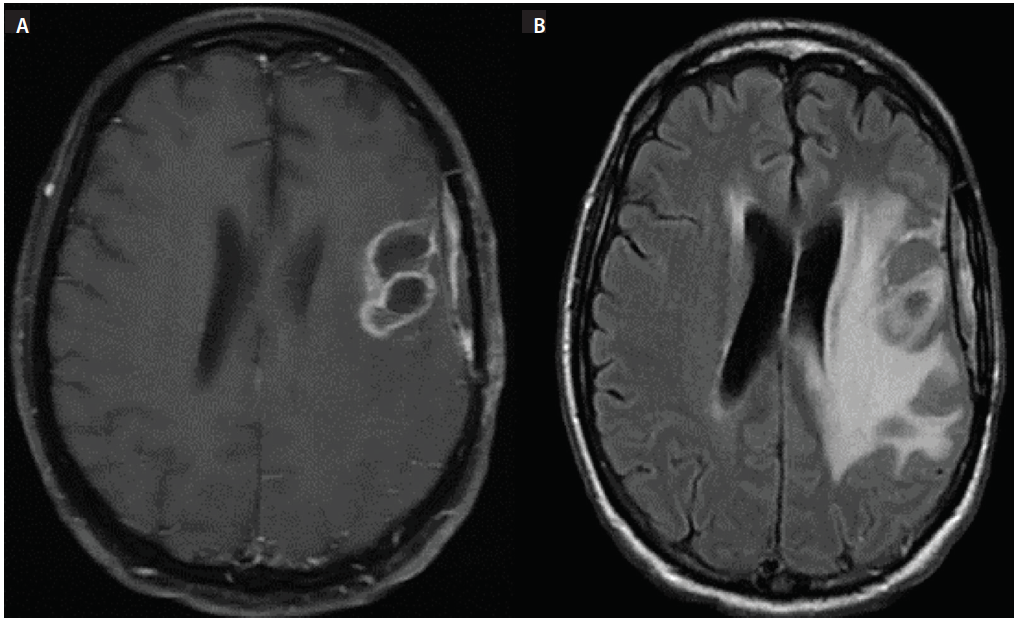 1. What is the most likely diagnosis?

Question 1: A, The most likely diagnosis is glioblastoma, which are typically hypointense on MRI T1 enhancing heterogeneously postcontrast.

2. Which molecular finding is most likely for Mr. D’s lesion?

Question 2: C, The most likely molecular finding for the lesion as described above is TERT mutation.

Question 3: D, Radiation/temozolomide followed by additional temozolomide (A), sometimes referred to as the "Stupp regimen", has been shown to improve survival when compared to radiation alone when studied in a randomized phase 3 trial.  The addition of tumor treating fields has been shown in another phase 3 trial (EF-14) to further improve survival and progression free survival when compared to the Stupp regimen.

4. After seeing Figure 3, what is the cause of Mr. D’s posttreatment decline?

5. What is the role of surgical resection in tumor recurrence?

D. There is no data to support either way

Question 5: B, Surgical resection for the tumor recurrence is possibly indicated.

Glioblastoma (GBM) are often centered in the subcortical white matter. High-grade gliomas, such as GBM, are typically hypointense on T1 MRI and enhance heterogeneously postcontrast. Vasogenic edema is common and often appears as hyperintense signal abnormalities on T2/FLAIR imaging. Hyperintense areas may harbor tumor cells; however, the extent of tumor is not limited to the area of enhancement.

Oligodendrogliomas less frequently enhance and sometimes have calcifications suggestive, but not pathognomonic for oligodendroglioma. Bacterial/fungal abscesses can appear as ring-enhancing lesions but usually present with concurrent or preceding systemic symptoms. Further, the histopathologic findings of Mr. D’s tumor do not occur with bacterial abscess. On diffusion-weighted sequences, restricted diffusion is typically seen within the lesion. Mr. D is older than is commonly seen with newly diagnosed multiple sclerosis (MS), and tumefactive MS often demonstrates an “open-ring” pattern of enhancement, which is not seen in Mr. D’s imaging studies.

On histopathology, astrocytic tumors characteristically have elongated/irregular nuclei with dark, clumped chromatin, whereas oligodendrogliomas typically show rounded nuclei and speckled chromatin. All glial tumors, including astrocytomas, oligodendrogliomas and ependymomas can be positive for GFAP. Characterized by microvascular proliferation and/or necrosis, GBM are more common than oligodendrogliomas, especially in patients over age 50. By definition, oligodendrogliomas must contain an IDH mutation and a 1p/19q codeletion.1,2

The unbalanced translocation 1p/19q codeletion is a defining feature of oligodendrogliomas, detected through fluorescence in situ hybridization (FISH). The H3K27M mutations can be detected via immunochemistry for a mutation-specific antibody or next generation sequencing and are present in diffuse gliomas of midline structures (eg, pons, thalamus, and spinal cord). These tumors have poor prognosis.4 The TERT promoter mutations are found in the majority of GBM from adults without IDH mutations.2,5

Treatment is demonstrated to have a survival benefit and, most frequently, is comprised of surgery followed by fractionated radiation therapy with concomitant and adjuvant temozolomide most frequently used.6-8 Tumor treating fields (TTFields) are directly applied to the scalp via electrodes, creating electrical fields with antimitotic effects. The side effects are usually cutaneous, with some skin irritation. In conjunction with adjuvant temozolomide after radiation, TTFields treatment is approved by the Food and Drug Administration (FDA) to treat GBM.9 For progressive GBM, TTFields treatment is also approved as a monotherapy. Addition of TTFields to maintenance temozolomide chemotherapy resulted in statistically improved outcomes (progression free survival and overall survival) compared to treatment with maintenance temozolomide alone or standard radiochemotherapy.10 Quality of life did not differ between groups treated with TTFields plus chemotherapy, maintenance temozolomide alone, or standard radiochemotherapy.11 Bevacizumab can help decrease edema associated with brain tumors and is a steroid sparing agent that is frequently used in recurrent GBM; however, clinical trials adding it to chemoradiotherapy for people with newly diagnosed GBM have not demonstrated improved survival.7,8

After treatment and clinical improvement, Mr. D had clinical symptoms of aphasia and apraxia return and also developed new-onset seizures. Worsening mass effect and edema were seen on his repeat brain MRI. There is no evidence of hemorrhage in the tumor bed. Treatment effect, seen with radiation with temozolomide, termed pseudoprogression, can be mistaken radiographically for disease progression. This is most often seen in the first 3 months after completion of radiation. Although there is some tumor pushing against the left lateral ventricle in Figure 3, there is no significant midline shift, nor is there any evidence of overt hydrocephalus. Together this makes it clear that Mr. D has a recurrence of GBM.

The role of reoperation in recurrent GBM is not quite clear. It is often utilized when removal of tumor bulk will lead to symptomatic improvement.12,13 The benefit with respect to survival is less defined. Several retrospective studies support a survival benefit with extensive resection. As an example, secondary analysis of a trial of 2 dose-intensified temozolomide regimens upon GBM recurrence demonstrated that surgery at first recurrence improves both survival and quality of life if there is complete resection of the contrast-enhancing tumor. This effect is more pronounced in patients who are younger, and those who have good performance status.14 Although intraoperative imaging, including intraoperative MRI and fluorescence guided surgery with 5-aminolevulinic acid (ALA), may be beneficial to maximize extent of resection, these are not standard of care.15,16