Case Report: Hemiparkinsonism in a Patient With Multiple Sclerosis

In this case, there was a causal relationship between comorbid diseases.

Mr L is age 41 with a history of multiple sclerosis (MS), bipolar disorder, and parkinsonism that has persisted despite being off neuroleptics for 1.5 years (Figures 1 and 2). He presented with right hemiparkinsonism characterized by a moderate amplitude rhythmic resting, postural and action hand tremor, moderate bradykinesia, and cogwheel rigidity at the wrist and elbow. His right leg and arm swing were depressed.

At age 35, Mr. L was diagnosed with MS after he presented with diplopia and his brain MRI findings showed demyelinating lesions in the brain (Figure 1), cervical, and thoracic spinal cord as well as unmatched oligoclonal bands in his cerebrospinal fluid. At that time, his diplopia improved spontaneously and he was started on fingolimod to treat his MS. 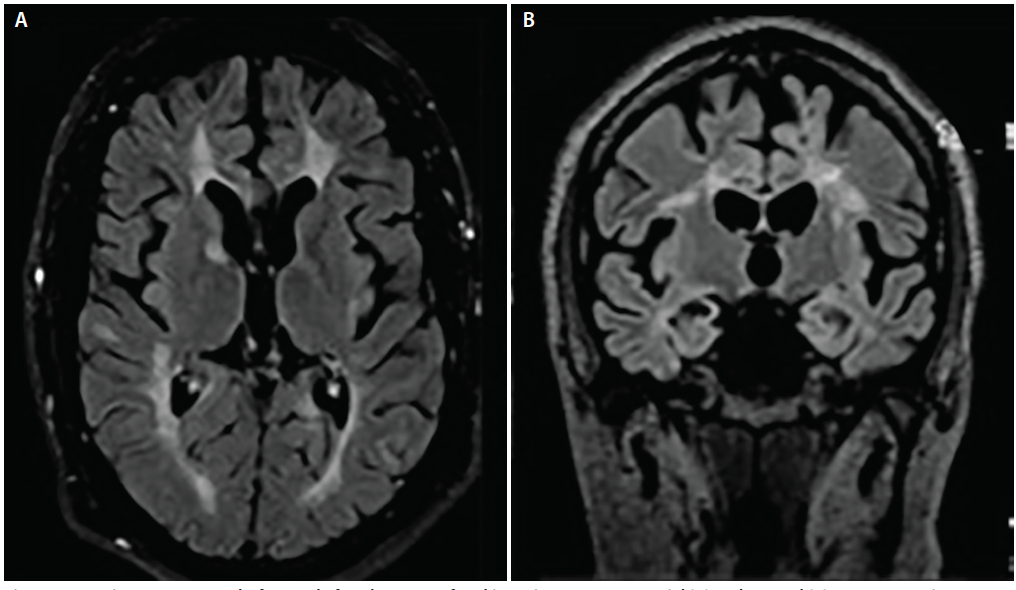 Figure 1. Imaging assessments before and after the onset of parkinsonian symptoms: Axial (A) and coronal (B) T2 FLAIR sections before the onset of hemiparkinsonism.

A year later, Mr. L developed mania and was diagnosed with bipolar disorder. He was initially treated with olanzapine and aripiprazole and then transitioned to aripiprazole and lithium. At age 37, 2 years later, he developed a right-hand action tremor.

By age 40, Mr. L’s tremor was reportedly worse and he complained of a decline in dexterity of his right hand with reduction in size of his handwriting and worsening gait. His neuroleptics had been discontinued. Brain MRI findings then showed new demyelinating lesions with discontinuous rim enhancement in the left globus pallidus, left frontal centrum semiovale, and right periatrial white matter MRI (Figure 2A-D). 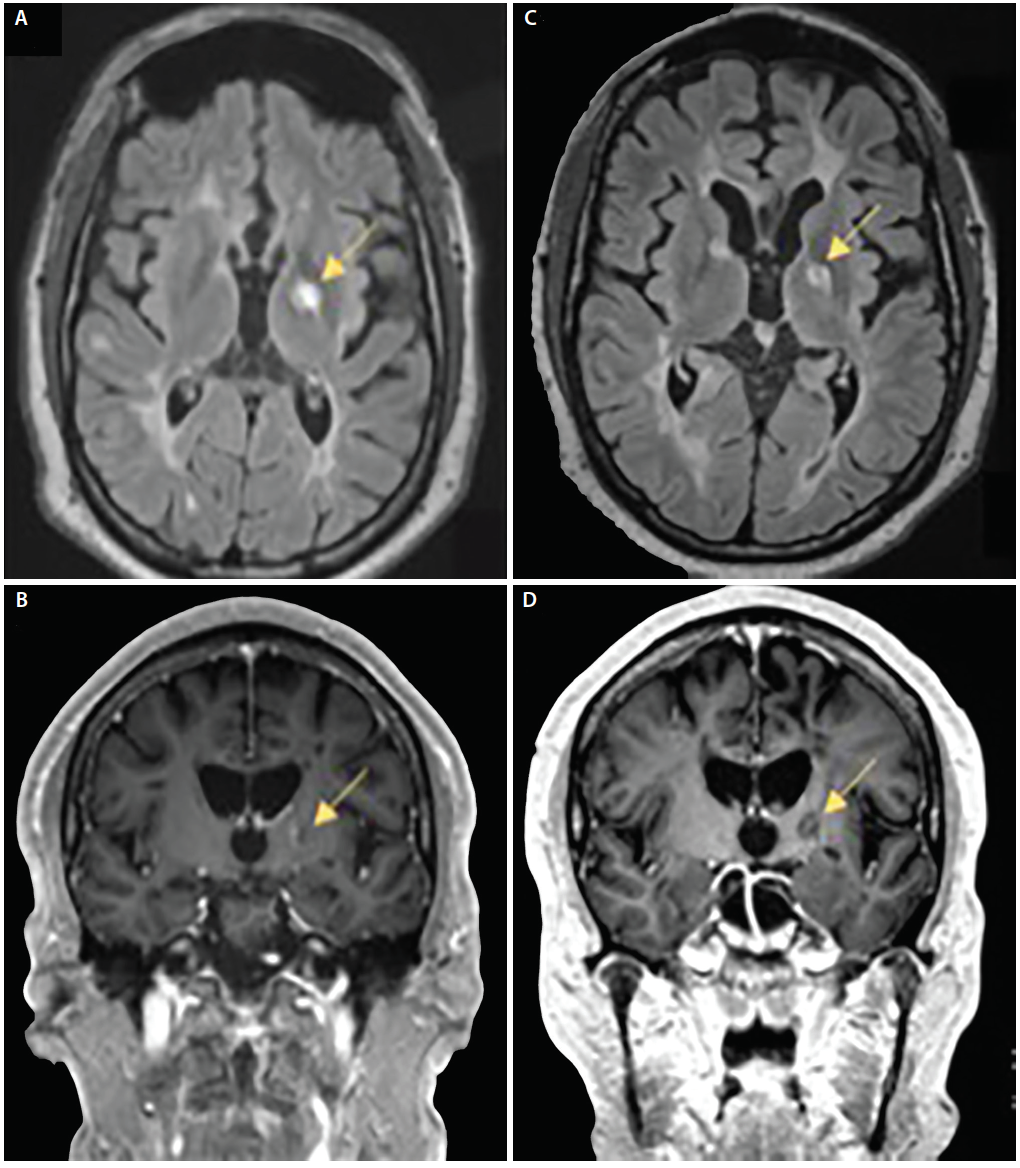 Approximately 10 months later, Mr. L had an ioflupane dopamine transporter scan (DaTSCAN) with normal presynaptic dopamine transporter uptake findings (Figure 3). His rest tremor, bradykinesia, and rigidity were unchanged, although his action tremor had improved. Levodopa or other dopaminergic agents were not initiated out of concern for worsening mania. 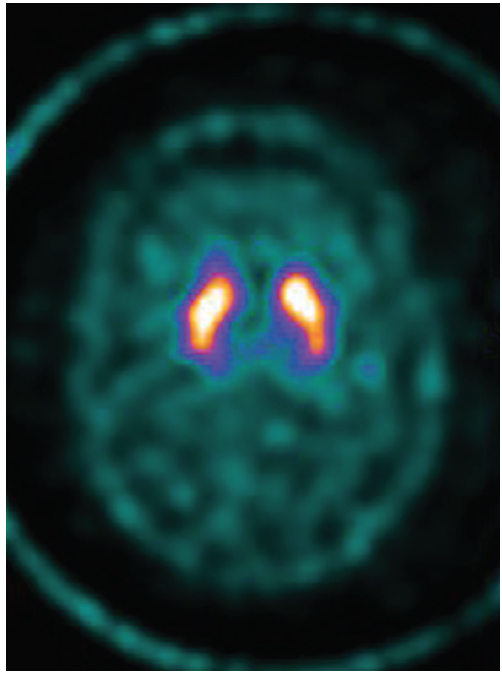 Mr. L was subsequently treated with quetiapine 100 mg daily. His parkinsonism has not worsened in over 2 years.

Multiple sclerosis (MS) is an autoimmune demyelinating disease that commonly causes white matter plaques, but deep grey matter nuclei can also be affected. MS manifests with a wide range of neurologic symptoms depending on the location of lesions. Parkinsonism is rarely comorbid with MS. Here we present a case of MS causing hemiparkinsonism, which developed subacutely in the context of an acute demyelinating lesion in the contralateral basal ganglia.

Parkinsonism associated with multiple sclerosis has been previously reported in the literature—implicated as both coincidental and causal.1,2 Coincidentally occurring parkinsonism with MS is supported by absence of demyelinating lesions in the basal ganglia on MRI, with abnormal uptake on DaTSCAN.2-4 Evidence for a causal relationship includes a strategically placed plaque in the basal ganglia-thalamocortical network that is time locked to the onset of parkinsonism, which subsequently improves with high-dose corticosteroids.1,5,6 Although hemiparkinsonism can be seen in idiopathic Parkinson’s disease, secondary etiologies such as tumors and vascular insults have been reported.7-9 The temporal relationship of bradykinesia onset in our patient with an active demyelination in contralateral globus pallidus as well as lack of symptom progression over 2 years of follow up support the hypothesis that heimparkinsonism was caused by a demyelinating plaque. A normal DaTSCAN suggests postsynaptic dopaminergic dysfunction related to the lesion and makes coincidental Parkinson’s disease unlikely. The diagnosis of drug-induced parkinsonism (DIP) is unlikely, because his symptoms occurred 1.5 years after discontinuing olanzapine and aripiprazole and did not improve following lithium taper. Furthermore, to our knowledge, DIP rarely causes hemiparkinsonism. Of note, quetiapine, which has a low propensity to cause DIP, was added a year after the symptoms developed, without any adverse effect on parkinsonian symptoms. A systematic analysis is warranted to determine whether a higher incidence of parkinsonian symptoms in MS patients with plaques within basal ganglia-thalamocortical network may exist and whether dopamine receptor-blocking agents can unmask parkinsonism in such MS patients.

APL and GMR contributed equally to the manuscript.

Last Word: Eptinezumab on the Horizon