The Speed of Trust Advances Treatments

Spatial retraining for spatial neglect by learning at the speed of trust. 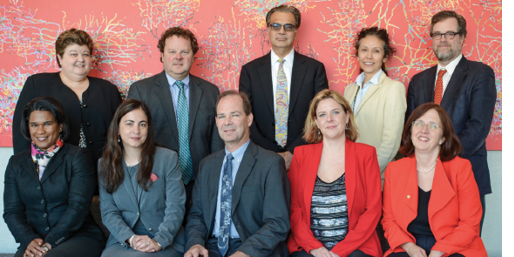 Spatial neglect and resulting problems with managing 3-dimensional space adaptively are more disabling than paralysis or language and speech disabilities. The problem occurs in over 50% of patients hospitalized for stroke and impairs simple and complex functions, including the critical activities of daily living required to drive, work, and even manage personal finances. When writing numbers on a page, a patient with spatial neglect will often leave out digits on the far left, for example, reading “$1,506” as “$6.” Patients with spatial neglect have difficulty standing straight, failing to notice what happens with one side of the body, which makes standing, sitting, and walking all safety concerns (Box 1). These patients have longer stays in rehabilitation hospitals, yet do not make as much progress in rehabilitation as patients without spatial neglect. They experience twice as many falls during stays in rehabilitation hospitals and are less likely to return home.

Box 1. Cheryl M. Wonders if She Will Ever Recover

Leaving the hospital after a stroke was not what Cheryl M. (name changed for confidentiality) expected. Cheryl had been a research nurse, and recently had been enjoying an active retirement with many volunteer activities. Now in an ironic twist of fate, she was awaiting discharge from the same stroke unit where she’d been a research expert in neurologic disorders for 20 years. Cheryl’s stroke occurred at the office of a former colleague; thus, a headache, collapse, and paralysis on the left side led swiftly to her transport to the emergency department and a series of emergency procedures.

Cheryl had hoped that on the morning of her discharge she would be able to get out of bed, walk out of the hospital, and return home to her grown daughter and husband. Her neurologist, who she’d known since he was a resident 10 years ago, came to her bedside to talk to her and her husband about the next stage in her care. “Mrs. M. needs to transition from here, to a rehabilitation facility,” the neurologist told her husband.

Cheryl watched her doctor turn from her husband, to look at her. His eyes seemed to slide away from her face before their gaze could meet. “Mrs. M., the next step in your recovery will involve the rehabilitation specialists working with you to help you regain your independence. We want you to sit up without help, put on your clothes effortlessly, and get around as you need to. Intensive rehabilitation, 3 hours of therapy a day, is the best way for you to make a good functional recovery. Your thinking and your ability to use your vision to move have also been affected by your stroke. You have a disorder called spatial neglect that’s making it difficult for you to position yourself and move your body in space naturally. It also affects how you plan actions on the left side.”

The scene was surreal to Cheryl. Was she imagining it, or was her doctor’s tone uncomfortable, even evasive? Was this rehabilitation idea just a way of letting her know that she was never going to recover, that she would be eventually living in a nursing home? What did spatial neglect mean for her, really?

Mrs. M. had a right-sided stroke, and her spatial neglect, which can be thought of as a disruption of her internal GPS, occurs in more than 50% of patients hospitalized for stroke. When Mrs. M. started her therapy, spatial neglect prevented her from maintaining her balance. Her trunk had to be supported by a therapist before she could even sit up safely to eat a meal. She seemed positioned as if she were on a fast-moving carnival ride, leaning and bracing her body too far toward her right side. Her head and eyes were constantly turning and orienting to the right and seemed to slip away to the right if a person addressed her from the front, seeming almost as if she were averting her gaze, or was uninterested. When she tried to grasp a walker to help herself stand, she put both hands on the right side of the walker, almost toppling it over. Her therapist had to catch her to keep her from falling to the right. The most tragic part of her spatial neglect was Mrs. M.’s inability to understand her own behavior. When she was asked, she said her posture felt upright and stable, her movements normal and balanced.

However, spatial neglect is usually not diagnosed or treated. What the patient described in Box 1 experienced was a step forward from what most of the 300,000 people with spatial neglect on US stroke units every year go through. She was fortunate to be at one of two places at the time that were actively diagnosing and prescribing visual-motor training with off-the-shelf optical prisms as part of her rehabilitation.

A Paradigm Shift in Treatment of Spatial Neglect 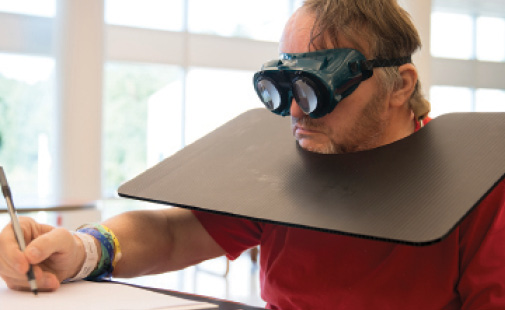 Figure 1. Patient undergoing prism adaptation—spatial retraining for patients with stroke or brain trauma during inpatient rehabilitation. The patient wears wedge prism goggles that shift what he is seeing, to the right. While wearing these goggles, he completes pen and paper activities for 20 minutes a day, 10 times over 2 weeks. This protocol results in significant functional recovery. (Photo contributed by Joan Banks, Kessler Foundation.)

There is a treatment for spatial neglect that uniquely targets spatial aiming and visual-motor rehabilitation through the use of prism lenses (Figure 1), but it has been appreciably underutilized. Abnormally directed movements in spatial neglect account for specific disability in the hospital setting; that is, our understanding of the 3-dimensional world affects how we move. Yet, because doctors and therapists were taught that spatial neglect was a visual problem, they did not utilize tools identifying and treating spatial movements. Instead, most stroke, brain injury, and rehabilitation practitioners used tools they identified with improving vision and were familiar with, such as verbal cuing methods.

At the Kessler Foundation and the Kessler Institute for Rehabilitation, our research on spatial neglect care introduced a paradigm shift. Instead of treating spatial neglect as something that could not be changed and which clinical staff, patient, and family had simply to accept, clinicians began to present it as a problem of movements that could recover with spatial retraining. This included several steps and changes in clinical perspective (Table).

Some of these tools were last formally investigated in the 1970s; some of them have never been formally evaluated (Table).

We, and others in France, Germany, Switzerland, Italy, Japan, and many other countries demonstrated that spatial retraining with prism adaptation helped people with spatial neglect to become independent by starting to use a wheelchair, dress themselves, and return to their routine. It wasn’t, however, until the therapists working with us started to see the gains patients were making that we earned their trust, and the paradigm shift took hold.

Spread Paradigm Shifts with the Speed of Trust

In 2016-2017, I was honored to be selected as part of a group of mid-career leaders supported by the American Academy of Neurology, the Transforming Leaders Program (https://www.aan.com/conferences-community/leadership-programs/transforming-leaders/). As our group project, my colleagues and I worked to address how the American Academy of Neurology could expand the scope of neurologic practice to include a greater emphasis on preventive, interventional, and regenerative care. Each of the team members also developed an individual project, expanding the scope and impact of neurologic care in their subspecialty, discipline, region, and institutions.

It is said that new work processes move forward at the speed of trust. The spatial systems in the right brain tell us continuously where our bodies are in the 3-dimensional world. With our spatial system, we can accomplish goals as challenging as steering a car at 60 miles per hour on a rainy highway, or as straightforward as maneuvering around a conference table while greeting a colleague, holding a cup of coffee, and wearing new high heels.

As part of our training in the Transforming Leaders Program 2016-2017 American Academy of Neurology group, we focused on how a system of communication, practice, monitoring, and trust can also change the paradigm of neurological care. A new-rologist leads and facilitates clinical teams, builds tools to implement new therapies, and communicates the vision and purpose of team-based care. 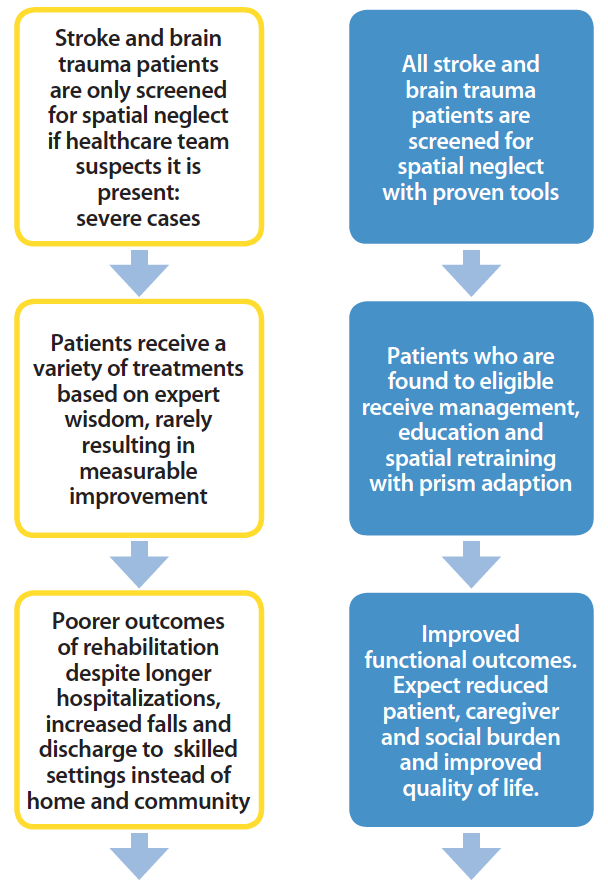 We recommended that neurologists can become active change agents to develop, recommend and guide national policy and our field. In this new role, we can introduce work processes into practice that are required as new, evidence-based treatments emerge for previously untreatable neurological disorders. Organizations like the American Academy of Neurology will be invaluable allies that may serve as catalysts for change. They can provide endorsement, infrastructure, and encouragement to neurologists and their teams. However, the process will always require a neurologist at the bedside, whose belief in the possibility of rehabilitation inspires the team to action.

Mrs. M.’s neurologist knew about spatial neglect and had diagnosed it correctly; he had a plan for her rehabilitation care. The team at the inpatient rehabilitation hospital also knew about spatial neglect and was prepared to administer a simple treatment of visual-motor training with off-the-shelf optical prisms (see Figure). Prism adaptation training was an excellent way of restoring Mrs. M.’s function and over 20 publications further support that it can improve the ability to perform daily life activities.

Now Mrs. M. comments, “I didn’t realize the problems I was having, and that was my biggest problem.” She smiles and says, “My family and I were lucky that the therapy team had researchers to create the direction of my treatment. Because of research, I came to Kessler Institute, where they were prepared.” She smiles. “What I always said as a researcher, was that the right studies generate results that convince everyone to get on board, because they will make life easier.”

Now that Mrs. M. is walking and completely independent, she and her family are among the key stakeholders who are being approached to advise our 10-site practice-based network of inpatient facilities administering spatial retraining with prism adaptation. At each of these facilities, therapists are trained to administer the clinical protocol of prism adaptation developed by me and my team at the Kessler Foundation. The Wallerstein Foundation for Geriatric Improvement is providing funding support, so that we can pool our efforts to track the impact on care quality, value, and patient experience. We hope to confirm the advantage to organizations and payers, scientists, patients, and the public, of identifying spatial neglect and making this hidden disability visible and treatable.

We presented that neurologist-led care pathways could extend to rehabilitation and enhance recovery. Neurologists can lead this process, reminding our colleagues, patients, their families, and the public that our purpose is to improve rehabilitation so that we can serve all of society (Box 2). I emphasized the need to inspire practitioners to try the spatial neglect care pathway in a 2016 TEDx lecture in Herndon, Virginia.

Seizures and Epilepsy in the Elderly