The FDA has extended the Prescription Drug User Fee Act (PDUFA) date for its review of the Biologics License Application of Genentech’s investigational agent for the treatment of multiple sclerosis Ocrevus (ocrelizumab) to March 28, 2017. Ocrevus is a humanized monoclonal antibody designed to selectively target CD20-positive B cells, a specific type of immune cell thought to be a key contributor to myelin (nerve cell insulation and support) and axonal (nerve cell) damage. According to the company, the extension is the result of the submission of additional data regarding the commercial manufacturing process of Ocrevus, which required additional time for review.

Meanwhile, key findings from the phase 3 program reviewing ocrelizumab’s safety and efficacy in relapsing and primary progressive multiple sclerosis were recently published in The New England Journal of Medicine (December 21).

In two identical studies known as the OPERA trials, the annualized relapse rate was lower in patients treated with 600mg ocrelizumab every 24 weeks for 96 weeks than with interferon beta-1a. Moreover, the percentage of patients with disability progression was significantly lower with ocrelizumab than with interferon beta-1a at both 12 and 24 weeks. Regarding adverse events, infusion-related reactions occurred in 34.3 percent of the patients treated with ocrelizumab, the researchers observed. Serious infections, however, were lower in the ocrelizumab group. The researchers concluded that larger and longer studies are needed to better elucidate the safety of ocrelizumab.

Infusion-related reactions, upper respiratory tract infections, and oral herpes infections occurred more frequently in patients treated with ocrelizumab than with placebo, the researchers noted. In addition, neoplasms occurred in 2.3 percent of patients who received ocrelizumab and in 0.8 percent of patients who received placebo; there was no clinically significant difference between groups in the rates of serious adverse events and serious infections. For these reasons, the investigators suggested that extended observation is required to determine the long-term safety and efficacy of ocrelizumab for primary progressive MS.

In addition, after multivariable adjustments, those in the lowest vs. the highest serum 25(OH)D quartile had 113 percent higher odds for frequent headache, the researchers noted.

A newly developed active vaccine against pathological tau proteins passed its first test with the positive results of a randomized, double-blind, placebo-controlled phase 1 trial published in The Lancet Neurology (2017 Feb; 16(2): 123-134). In the 12-week trial, researchers evaluated 30 participants between the ages of 50 and 85-years-old with mild-to-moderate Alzheimer’s disease who received three subcutaneous doses of AADvac1 or placebo from masked vaccine kits at monthly intervals. They then entered the open-label phase, in which all patients were allocated to AADvac1 treatment and received another three doses at monthly intervals. Two patients withdrew because of serious adverse events, while the most common adverse events were injection site reactions after administration, the authors noted; one patient with pre-existing microhaemorrhages had newly occurring microhaemorrhages. Of 30 patients given AADvac1, 29 developed an IgG immune response, while baseline values of CD3+ CD4+ lymphocytes correlated with achieved antibody titres. The investigators noted that further trials are needed and warranted to corroborate the safety assessment and to establish proof of efficacy. In addition, the authors of an accompanying editorial in The Lancet Neurology observed that the results represent a “tentative step” in what could be a promising development.

Takeda and Ovid Therapeutics are teaming up for the clinical development and commercialization of Takeda’s investigational new drug TAK-935, a novel CH24H inhibitor, in rare pediatric epilepsies. TAK-935 has successfully completed phase 1 clinical development and will be moving into phase 1b/2a clinical studies in rare epileptic encephalopathies where patients continue to suffer from significant unmet medical needs.

Under the terms of the agreement, Takeda received equity in Ovid and may be eligible to receive certain milestone payments based on the advancement of TAK-935. The companies will share in the development and commercialization costs on a 50/50 basis and, if successful, the companies will share in the profits on a 50/50 basis. Takeda will lead commercialization in Japan and has the option to lead in Asia and other selected geographies. Ovid will lead clinical development activities and commercialization of TAK-935 in the US, Europe, Canada, and Israel.

All activities of the collaboration regarding TAK-935 will be guided by the Takeda/Ovid “One Team” concept, an integrated and interdisciplinary team from both companies devoted to the successful advancement of TAK-935 across rare epilepsy syndromes. The companies expect to initiate a Phase 1b/2a study in 2017 in patients with rare epileptic encephalopathies, including Dravet syndrome, Lennox-Gastaut syndrome, and Tuberous Sclerosis Complex.

A British study has found extremely high levels of aluminum in the tissue of brains of individuals with familial Alzheimer’s disease. Using fluorescence microscopy to identify aluminum, investigators looked at brain tissue from 12 donors who were genetically predisposed to Alzheimer’s, finding in excess of 10μg/g tissue dry wt—levels that are higher than almost all previous measurements of brain aluminum. Cases of sporadic Alzheimer’s disease have previously been linked to unusually high exposure to aluminum through the environment or workplace. However, these earlier studies have failed to explain the causes of Alzheimer’s in those genetically predisposed to the disease. The results were published in the Journal of Trace Elements in Medicine and Biology.

Eli Lilly and Co. is set to acquire CoLucid Pharmaceuticals for $960 million. CoLucid is currently developing lasmiditan, a migraine medicine that could help patients with cardiovascular disease. Clinical testing on the agent—which is under investigation in both oral and intravenous forms—is ongoing and expected to be completed by year’s end, according to the company. Lilly scientists patented lasmiditan and licensed it to CoLucid in 2005.

The deal is expected to close by March. If approved, Lilly will also acquire the headache medication galcanezumab and the pain-killer tanezumab, which is being studied in a partnership with Pfizer.

New study results suggest that an investigational device that combines transcranial magnetic stimulation (TMS) with cognitive training may improve cognitive performance in individuals with Alzheimer’s disease. The double-blind, placebo-controlled clinical study explored the potential of the NeuroAD Therapy system (Neuronix) in 131 patients with mild to moderate Alzheimer’s disease. The study specifically evaluated the system’s safety and efficacy in comparison to placebo, following six weeks of treatment and additional six weeks of follow-up. In patients with milder disease, representing 85 percent of the enrolled population, researchers noted a statistically significant difference of -1.8 points in ADAS-Cog between the treatment group and placebo group at the 12-week follow-up. In the entire cohort, including those with more severe disease at baseline based on the ADAS-Cog, results did not reach statistical significance. Additionally, CGI-C results in the overall population showed a trend toward improvement at 12 weeks, with a difference between treatment and placebo groups of -0.4 points. When analyzing the group of milder patients, as defined above, the difference between treatment and placebo groups reached -0.45. When measured on the CGI-C scale, only 16 percent of treated patients deteriorated, compared with 42 percent of patients in the placebo group.

In late December, the FDA approved Spinraza (nusinersen, Biogen) for the treatment of spinal muscular atrophy (SMA) in pediatric and adult patients, making it the first agent of its kind to secure approval.

In the pivotal clinical trial ENDEAR, infantile-onset SMA patients treated with Spinraza achieved and sustained clinically meaningful improvement in motor function compared to untreated study participants. In addition, a greater percentage of patients on Spinraza survived compared to untreated patients. In open-label studies, some patients achieved the ability to sit unassisted, stand, or walk when they would otherwise be unexpected to do so and maintained milestones at ages when they would be expected to be lost.

Spinraza was discovered and developed by Ionis and Biogen, and licensed to Biogen who is responsible for future development, manufacturing, and commercialization.

The FDA has designated NRL-1 (intranasal diazepam, Neurelis) as a Fast Track Development program for the management of selected, refractory patients with epilepsy, on a stable regimen of anti-epileptic drugs (AEDs), who require intermittent use of diazepam to control seizure clusters. NRL-1 is being developed for pediatric, adolescent, and adult epilepsy patients. Receiving the designation allows prioritized interactions between the FDA and Neurelis as the company completes the final stages of its clinical development program and prepares for submission of a New Drug Application (NDA) for NRL-1 by early 2018.

Investigators also noted favorable safety outcomes, with no patients experiencing seizures or other persistent, serious adverse events. Patients also showed a high degree of adherence to the treatment, with few discontinuations and a high rate of treatment completion, according to the company. 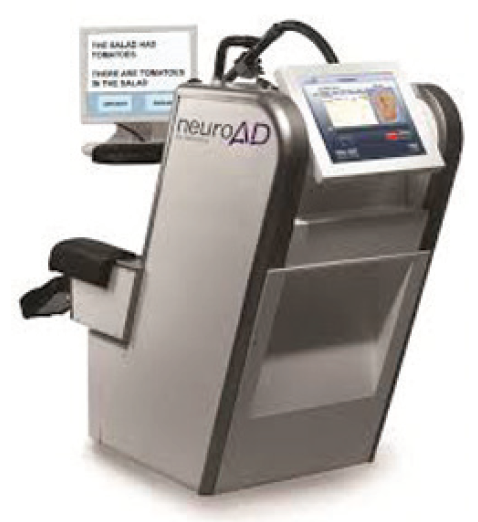 The results were used to support an FDA de-novo application filed in November 2016, seeking regulatory clearance to market the neuroAD Therapy System for treatment of Alzheimer’s disease. Previously, the neuroAD Therapy System was accepted for review under the Expedited Access Pathway (EAP) program. The system is currently approved for use in Europe (CE Marked 0482).

Acadia Pharmaceuticals has unveiled positive top-line results from its phase 2 exploratory study (-019 Study) of pimavanserin in patients with Alzheimer’s disease psychosis (AD Psychosis), a condition for which no other agent has been approved to treat. As a selective serotonin inverse agonist (SSIA) preferentially targeting 5-HT2A receptors, pimavanserin has a different biological mechanism than other marketed antipsychotics. In the study, pimavanserin met the primary endpoint showing a statistically significant reduction in psychosis versus placebo as measured by the Neuropsychiatric Inventory-Nursing Home (NPI-NH) Psychosis score at week six of dosing. Additionally, pimavanserin was generally well tolerated and the safety profile was consistent with what has been observed in previous studies.

Pimavanserin is currently approved for treatment of hallucinations and delusions associated with Parkinson’s disease psychosis.

In Practical Neurology®’s coverage of the Annual Meeting of the American Epilepsy Society (AES), experts sounded off on the latest research, technology, and clinical trends in the epilepsy spectrum, from advances in functional imaging to the use of stem cells for epilepsy prevention. 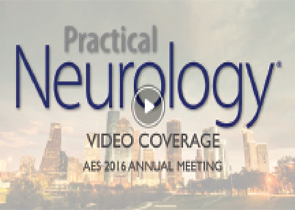 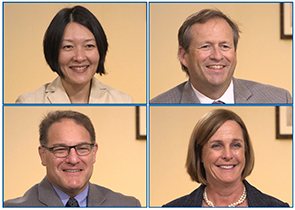