“Plasma NFL is associated with AD diagnosis and with cognitive, biochemical, and imaging hallmarks of the disease,” the authors concluded. “This finding implies a potential usefulness for plasma NFL as a noninvasive biomarker in AD.”

Sunovion Pharmaceuticals has submitted a supplemental new drug application (sNDA) to the FDA to expand the indication for its antiepileptic drug AED Aptiom (eslicarbazepine acetate) to include use as monotherapy or adjunctive therapy for the treatment of partial-onset seizures (POS) in children four years of age and older. An ongoing development program for Aptiom includes a phase 4 study in adults with POS that is designed to evaluate Aptiom in real-world clinical settings supporting the use of Aptiom as adjunctive therapy for POS. The company is also planning a phase 3 clinical study in children younger than four years of age.

Review Supports Broader Use of Botulinum Toxins for Pain

Botulinum neurotoxins may have an increasingly important role to play in the treatment of various forms of chronic pain, results of a new review study suggest (J Headache Pain. 2017 Dec;18(1): 38. Epub March 21). Based on the meta-analysis and randomized control trials, authors found that botulinum toxins may represent an effective prophylactic treatment for chronic migraine, and may be helpful in other types of cranial, facial, and cervical pain, as well as in patients with trigeminal neuralgia, peripheral and spinal neuropathic pain, some types of pain secondary to musculoskeletal diseases, and bladder pain syndrome. For most of these conditions, however, they noted that the quality of evidence is low and that samples sizes for controlled trials are also low. They suggested that future research should explore the use of botulinum toxin injections combined with systemic drugs and/or physical therapies as new pain treatment strategies.

Certain Antidepressants and AEDs May Be Effective for Nerve Pain

Certain antidepressants and anti-seizure drugs are among medications that effectively treat diabetic nerve pain. In findings published in the journal Neurology, researchers found moderate evidence in studies and systematic reviews that the antidepressants duloxetine and venlaxine, which act as serotonin-norepinephrine reuptake inhibitors, were effective in reducing neuropathy-related pain.

They also found weak evidence that botulinum toxin, the anti-seizure drugs pregabalin and oxcarbazepine, as well as drugs classified as tricyclic antidepressants and atypical opioids were probably effective in reducing pain. Of note, the results showed that while pregabalin works in the same way as gabapentin, the latter was not more effective than placebo. 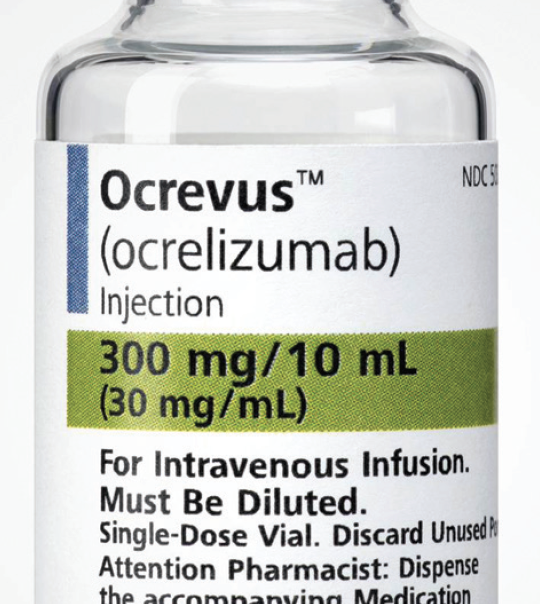 In two identical studies evaluating ocrelizumab in relapsing MS known as the OPERA trials, the annualized relapse rate was lower in patients treated with 600 mg ocrelizumab every 24 weeks for 96 weeks than with interferon beta-1a. Moreover, the percentage of patients with disability progression was significantly lower with ocrelizumab than with interferon beta-1a at both 12 and 24 weeks. Regarding adverse events, infusion-related reactions occurred in 34.3 percent of the patients treated with ocrelizumab, the researchers observed. Serious infections, however, were lower in the ocrelizumab group.

Ocrevus will be available within two weeks. Genentech will be offering comprehensive services for people prescribed Ocrevus to help minimize barriers to access and reimbursement.

The FDA approved Xadago (safinamide, Newron Pharmaceuticals) tablets as an add-on treatment for patients with Parkinson's disease who are currently taking levodopa/carbidopa and experiencing “off” episodes. The approval is based on results of a clinical trial in which 645 patients receiving safinamide in addition to levodopa experienced more beneficial “on” time, when Parkinson's symptoms are reduced. The increase in “on” time was accompanied by a reduction in “off” time and better motor function scores during “on” time than before treatment, according to the results.

According to Laxman Bahroo, DO, Associate Professor of Neurology at Georgetown University and Practical Neurology® editorial board member, safinamide is a welcome addition to the therapeutic armamentarium for Parkinson's disease. “Safinamide is a novel MAO-B inhibitor that reduces off time and improves on time without troublesome dyskinesia,” says Dr. Bahroo. “Maintaining ‘on' time without worsening dyskinesia is an unmet need in advancing Parkinson's disease.”

The most common adverse events for patients taking Xadago include uncontrolled involuntary movement, falls, nausea, and trouble sleeping. Less common serious side effects include hypertension, serotonin syndrome (when used with MAOIs, antidepressants, or opioid drugs), hallucinations and psychotic behavior, and problems with impulse control or compulsive behaviors. The indication also notes that patients who have severe liver problems or who take dextromethorphan should not take safinamide.