The four-year extension study evaluated patients who were involved in the two-year CARE-MS Phase III pivotal studies. The investigators found that the low annualized relapse rates observed in patients who received Lemtrada in the Phase 3 studies CARE-MS I (0.16) and CARE-MS II (0.28) remained consistent throughout the extension (0.12 and 0.15 at year six). Additionally, in each of years three, four, five and six, most patients had no evidence of MRI disease activity.

According to Aaron Boster, MD, a clinical investigator on the CARE-MS trials, there are several notable facets of the data that reveal the clinical and practical significance of the results. “At six years, most people have never been re-treated, which is categorically different than the use of any other DMT in the history of MS,” said Dr. Boster, in an interview with Practical Neurology®. “And despite patients not having been re-treated, we’re seeing continued improvement in clinical and MRI parameters going out six years. Moreover, while we’re seeing this improvement without re-treating, there are no new safety signals,” said Dr. Boster.

Dr. Boster believes that the durable, continued improvement is attributable to the differential repopulation of the immune response that alemtuzumab fosters. “Untreated MS patients have a disproportionate amount of inflammatory T cells compared to regulatory T cells. When you give alemtuzumab you knock out both cell lines, but when they grow back the regulatory compartment grows larger and also more active, and so the new immune system that you garner from treatment with alemtuzumab is a game changer,” Dr. Boster observed.

Susan Schneider Williams, the widow of actor/comedian Robin Williams, has been appointed to the Board of Directors of the American Brain Foundation (ABF). The appointment is an extension of Ms. Schneider Williams’s commitment to educating physicians and caregivers about how brain disease, particularly Lewy body disease (LBD), can impact those suffering from it. “We are very pleased to welcome Ms. Schneider Williams to the ABF and look forward to her strong commitment to our cause,” said Kevin Goodno, Chair of the ABF Board of Directors, in a statement. “She shares our organization’s collective passion to accelerate brain disease research and find a cure for brain disease.”

Ms. Schneider Williams also recently penned an editorial entitled “The terrorist inside my husband’s brain,” in a recent edition of Neurology chronicling Robin Williams’ mental and physical struggles over the last few years of his life. “My goal is to turn Robin’s suffering into something meaningful,” said Schneider Williams. “Hopefully, from sharing his experience, our experience, I can help raise awareness and increase funding for brain disease research.” She added, “working with the ABF and their incredible community of medical professionals has given me hope that with more research, a cure is possible.”

Neural Analytics, Inc. has received a $3 million grant from the National Institutes of Health (NIH) to support a clinical validation study of its portable brain monitoring platform.

The grant is supported by the NIH’s Small Business Innovation Research (SBIR) program to develop life-saving innovations for urgent needs in health care. “We are honored to receive this NIH grant, which will allow us to accelerate the development of our technology to detect traumatic brain injury (TBI) and stroke as early as possible,” said Leo Petrossian, Chief Executive Officer of Neural Analytics, in a statement. “Neural Analytics is committed to bringing urgently needed portable diagnostic tools to clinicians in order to help expedite care for the millions of patients who suffer from these neurovascular conditions each year.”

A new 12-week study presented at the recent World Parkinson Congress in Portland, OR suggests that a 2mL dilution of abobotulinumtoxinA (Dysport, Ipsen) may be effective for adult patients with cervical dystonia. Researchers evaluated 129 patients who were randomized to receive abobotulinumtoxinA 500 units/2mL or placebo. They found that abobotulinumtoxinA patients experienced significantly greater changes from baseline in TWSTRS score at week four (-2.5 vs -10.8; based upon the modified intent to treat population).

Adverse events occurred in 41 percent and 22 percent of abobotulinumtoxinA and placebo patients, respectively. Dysphagia was reported in nine percent of treated patients, while other AEs were muscle weakness, neck pain, and headache. However, the researchers noted that no unexpected AEs were observed relative to previous studies that used the recommended 1 mL dilution volume.

The Parkinson’s Disease Foundation recently launched its eighth series of PD ExpertBriefings—six free online seminars which address unmet needs in Parkinson’s education. The series offers additional seminars that address aspects of day-to-day living with Parkinson’s, such as coping with an early diagnosis, understanding misunderstood symptoms such as skin changes, sleep and pain, and navigating legal and financial issues as a Parkinson’s care partner.

Qualifying health professionals have the opportunity to earn free continuing education credits by participating live or within 30 days of any PD ExpertBriefing. Online viewers can submit questions to presenters during the live seminars.

To join a PD ExpertBriefing online or by mobile device, visit www.pdf.org/parkinsononline or contact PDF at (800) 457-6676 or info@pdf.org.

The FDA has approved BurstDR stimulation, a physician-designed form of spinal cord stimulation (SCS) for patients with chronic pain. According to manufacturer St. Jude Medical, BurstDR helps physicians address their patients’ physical and emotional responses to pain and reduce overall pain and suffering.

Results from a Phase I clinical trial suggest that boost immunizations with AFFITOPE® PD01A (AFFiRiS), an active vaccine against a protein that’s thought to play a role in Parkinson’s disease, may increase immune response and is both safe and well tolerated.

In the study, investigators observed immune response against AFFITOPE® PD01A in 19 out of 22 vaccinated patients, and 12 of 19 of these responders generated alpha synuclein-specific serum antibodies. The immune response sustained throughout the entire observation period of 24 weeks. Across all patients, no antibody concentration limiting toxicity was observed. Adverse events were similar across all five groups except injection site reactions, which only occurred in the active treatment groups, and psychiatric disorders, reported at a lower rate in the active groups.

The study was funded by a $1.04 million grant from The Michael J. Fox Foundation for Parkinson’s Research and presented at the Poster Tour of Leading Abstracts at the recent 4th World Parkinson Congress in Portland, Oregon.

Another study, AFF008AA, is focusing primarily on the long-term safety as well as the assessment of the immunological and clinical effects of a second boost vaccination (“reboost”). That study is also funded by The Michael J. Fox Foundation. Recruitment of patients for AFF008AA has been completed; results are expected in Q2 2017.

Adopting the new guidelines for the use of MRI in the diagnosis of multiple sclerosis (MS) may lead to earlier diagnosis, according to new findings presented at ECTRIMS.

The new guidelines, the result of the MAGNIMS study published earlier this year in Lancet Neurology, put forth criteria for MS diagnosis in patients with Clinically Isolated Syndrome (CIS) and specify that at least two of the following signs are visible on a detailed MRI scan:

Testing the criteria, investigators from the MAGNIMS study followed 72 patients with Clinically Isolated Syndrome (CIS) over two years, with the goal of revealing better the lesions present in the grey matter and in the adjacent white matter. Patients had a double inversion recovery MRI (DIR MRI) scan at study entry, as this increases grey matter lesion detection compared to standard MRI. After two years, 90 percent of those recruited to the study had developed MS, while 10 percent were found to have a separate neurological condition. The investigators concluded that the use of DIR MRI to detect lesions in the grey matter led to more patients being correctly diagnosed with MS right at the start of the study, suggesting that the new criteria increase the ability to diagnose MS in someone with very early clinical symptoms more accurately.

A new post-hoc analysis from the pivotal DECIDE study shows that a significantly greater number of people treated with Zinbryta (daclizumab, Biogen/AbbVie) achieved no evidence of disease activity (NEDA) compared to those taking Avonex (interferon beta-1a) intramuscular injection. Researchers examined the percentage of patients achieving NEDA status by time interval (including 24 to 96 weeks) to further evaluate the impact of Zinbryta on this measure. NEDA was defined as the composite of no clinical relapses, no 12-week confirmed disability progression, no new/newly enlarging T2 hyperintense lesions, and no gadolinium-enhancing (Gd+) lesions.

Data from a new patient cohort in an ongoing open-label study suggest that an investigational low-dose fenfluramine liquid solution may offer benefit as an adjunctive therapy for seizures associated with Dravet syndrome. Researchers evaluated nine patients who received ZX008 (Zogenix) following a three-month run-in period at a dose of 0.1 to 0.5mg/kg/day with a median duration of 1.5 years.

Results showed a median reduction of 75 percent (with a range from 28 percent to 100 percent), with seven of the nine patients experiencing greater than 50 percent reduction in major motor seizure frequency. The most common adverse events were somnolence (five patients) and anorexia (four). No evidence of cardiac valvulpathy or pulmonary hypertension was observed. The findings were presented at the recent European Congress on Epileptology. 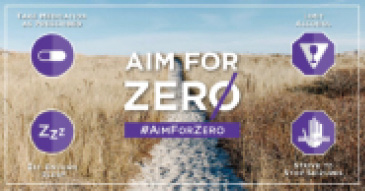 The Epilepsy Foundation’s SUDEP Institute issued an expert consensus report as part of its social media campaign to motivate people with epilepsy to reduce their risk of Sudden Unexpected Death in Epilepsy. AimForZero: Striving Toward a Future Free from Sudden Unexpected Death in Epilepsy highlights four steps those with epilepsy can take to avoid uncontrolled seizures:

As part of the campaign, the Epilepsy Foundation also launched the dedicated hashtag #AimForZero.
Visit Epilepsy.com for more information. n

The FDA has granted Fast Track designation to Biogen for aducanumab, an investigational human recombinant monoclonal antibody for early Alzheimer’s disease (AD). The new designation comes on the heels of the publication of Phase 1b data in Nature (September 1, 2016) showing that aducanumab reduced amyloid-beta in the brain in a dose-dependent manner in a pre-clinical animal model. “In patients with prodromal or mild AD, one year of monthly intravenous infusions of aducanumab reduces brain Aβ in a dose- and time-dependent manner,” the study authors wrote. “This is accompanied by a slowing of clinical decline measured by Clinical Dementia Rating—Sum of Boxes and Mini Mental State Examination scores. The main safety and tolerability findings are amyloid-related imaging abnormalities.” The investigators concluded that these results justify further development of aducanumab for the treatment of AD.

Aducanumab is currently being evaluated in two global Phase 3 studies, ENGAGE and EMERGE, which are designed to evaluate its safety and efficacy in slowing cognitive impairment and the progression of disability in people with early Alzheimer’s disease. If the slowing of clinical decline be confirmed in ongoing phase 3 clinical trials, the authors noted that it would provide compelling support for the amyloid hypothesis.

The FDA has cleared BrainScope’s newest device for the assessment of traumatic brain injury (TBI), the Ahead 300. Developed in partnership with the US Department of Defense, the Ahead 300 provides a multi-modal device of clinically relevant measures, offering clinicians a comprehensive panel of data to assist in their diagnosis of the full spectrum of TBI, including concussion, according to the company. It features BrainScope’s proprietary, patent-protected electroencephalography (EEG) capabilities utilizing sophisticated algorithms and machine learning to analyze head-injured patient data. Additionally, the Ahead 300 provides a rapid, objective assessment of the likelihood of the presence of TBI in patients who present with mild symptoms at the point of care. The Ahead 300 will be the first product the company will sell commercially.

The Election and The Markets