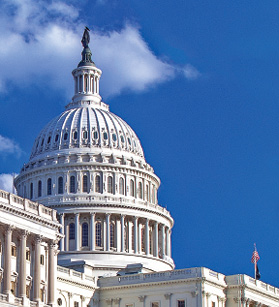 Last month, more than 200 neurologists from 41 states met with federal lawmakers for “Neurology on the Hill,” an event by the American Academy of Neurology (AAN) to educate Congress on the role of neurologists in health care. They were joined by 35 stroke advocates from the American Heart Association and American Stroke Association, who urged lawmakers to support the Furthering Access to Stroke Telemedicine (FAST) Act. The FAST Act would require Medicare to reimburse for telestroke services regardless of where a patient lives. Telestroke uses videoconferencing to connect stroke patients to off-site neurologists who can examine the patient, immediately interpret brain scan results and make treatment recommendations in consultation with Emergency Department personnel. Medicare currently only covers telestroke services for patients treated at a rural hospital, but not for patients at urban or suburban hospitals.

“When you have a stroke, timing is everything. Fast treatment can make a huge difference in your recovery and your quality of life thereafter,” said Mark Creager, MD, President of the American Heart Association. “But nearly 94 percent of the strokes that occur in America take place in areas where telestroke is not paid for by Medicare. Evidence indicates that telestroke improves patient outcomes and reduces disability nationwide. We urge Congress to give more Medicare patients access to this important technology and support the FAST Act.”

The AAN also asked Congress for continued support and funding for the BRAIN (Brain Research through Advancing Innovative Neurotechnologies) Initiative. Announced by President Obama in 2013, the BRAIN Initiative is a 12-year, public-private effort aiming to improve the lives of everyone on the planet by supporting research with a goal to greatly expand our knowledge about the human brain.

Later in the month, several neurologists were on Capitol Hill to participate in a Concussion roundtable held by The Energy & Commerce Committee in the House of Representatives. AAN members Walter J. Koroshetz, MD, FAAN, director of the NINDS at NIH, and Brian W. Hainline, MD, FAAN, chief medical officer for the National Collegiate Athletic Association (NCAA), and clinical professor of neurology at Indiana University School of Medicine and New York University School of Medicine, were asked to participate.

For the latest updates in legislative development in neurology, visit www.aan.com.

Women may have a better memory for words than men, despite evidence of similar levels of shrinkage in areas of the brain that show the earliest signs of Alzheimer's disease, according to a study published in Neurology (March 16, 2016 online). The study included participants from the Alzheimer's Disease Neuroimaging Initiative: 235 people with Alzheimer's disease, 694 people with mild cognitive impairment that included memory problems, and 379 people with no memory or thinking problems. Researchers compared the groups' performance on a test of verbal memory to the size of the hippocampal area of the brain, which is responsible for verbal memory and affected in the early stages of Alzheimer's disease.

Participating dementia specialists may now enroll patients to participate in the Imaging Dementia—Evidence for Amyloid Scanning (IDEAS) Study at IDEAS-Study.org. The IDEAS Study will follow more than 18,000 Medicare beneficiaries to determine the clinical value of a brain positron emission tomography (PET) scan to detect the hallmark brain amyloid accumulation of Alzheimer's disease in diagnosing and managing treatment of patients age 65 and older with mild cognitive impairment (MCI) or dementia of uncertain cause. Information from this scan can help exclude underlying Alzheimer's disease, and may help guide patient management.

To apply for participation, visit www.IDEAS-Study.org.

Investigators designed a system to immunosuppress mice to permit successful testing of MSCs as a delivery system for brain-derived neurotrophic factor (BDNF), a growth factor showing great promise for treating Huntington's disease. They injected those cells directly into the brains of mouse models of Huntington's, which were bred with a genetic mutation that closely mimics Huntington's disease in people. Following implantation, the mice were tested weekly for six weeks to detect behavioral changes. Treated mice exhibited significantly reduced anxiety compared with mice given placebo. The researchers also found that mice injected with the BDNF-producing MSCs had less degeneration of the striatum compared with the mice injected with placebo. Additionally, there was some evidence of significantly increased neuron growth activity in mice that received MSCs, compared with control mice. In addition, mice that received BDNF-producing MSCs had up to a 15-percent increased lifespan as compared to the control group.

The study was conducted as part of a five-year, multi-million dollar grant from the California Institute for Regenerative Medicine (CIRM) to develop a cellular therapy for Huntington¹s disease. An observational study, PRE-CELL, is already underway with Huntington's disease patients to measure their rate of disease progression, using periodic neurological testing, magnetic resonance imaging and testing of biomarkers in the blood and cerebrospinal fluid. The data were published in the journal Molecular Therapy and are expected to serve as a baseline for comparison for the same patients in a future planned Phase 1 safety and tolerability trial.

Spritam (levetiracetam, Aprecia Pharmaceuticals), the FDA-approved oral drug using novel 3D printing technology, is now available as an adjunctive therapy in the treatment of partial onset seizures, myoclonic seizures, and primary generalized tonic-clonic seizures. Offering a new option for patients who may struggle to take their medicine, Spritam disintegrates in the mouth with a sip of liquid. It has been formulated with Aprecia's proprietary ZipDose Technology, which incorporates 3D printing to produce rapidly disintegrating formulations of medications, according to the company. Manufactured in a regulated commercial-scale facility, Spritam is available in four unit-dose strengths, including 250 mg, 500 mg, 750 mg and 1,000 mg.

GW Pharmaceuticals unveiled positive results from its pivotal Phase 3 study of its investigational cannabidiol medicine Epidiolex for the treatment of Dravet syndrome. Researchers randomized 120 patients to receive either Epidiolex 20mg/kg/day or placebo, with each agent being added to current anti-epileptic drug treatment regimens. The researchers then compared the percentage change in the monthly frequency of convulsive seizures during the 14-week treatment period. They found that patients taking Epidiolex achieved a median reduction in monthly convulsive seizures of 39 percent compared with a reduction on placebo of 13 percent. A series of sensitivity analyses of the primary endpoint confirmed the robustness of this result. The investigators also noted that the difference between Epidiolex and placebo emerged during the first month of treatment and was sustained during the entire treatment period.

Epidiolex has both Orphan Drug Designation and Fast Track Designation from the FDA in the treatment of Dravet syndrome, a rare and debilitating type of epilepsy for which there are currently no treatments approved in the US.

The new InfoRx mobile app, recently released from Vivacare, enables neurologists to deliver personalized patient handouts, videos, and other educational resources into the hands of their patients and family members. The service is available to US-based neurology professionals at no cost. 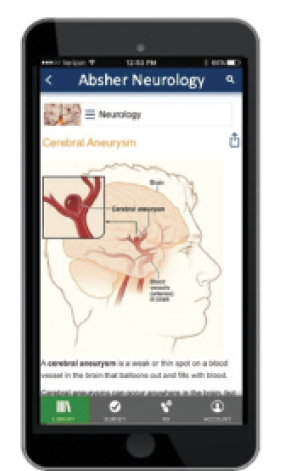 Neurologists enroll online for a Vivacare account and create a personalized “Health Library” with patient education resources that can be printed in the office and displayed on the medical practice website. The app makes these resources available on the patient's own mobile device. Patients with iPhones can go to the App Store to download the InfoRx app and enter a unique code to view their own doctor's Health Library. Patients can also gain access to prescription medication savings and other features. Additionally, neurologists can distribute a robust collection of advertising-free resources to their patients through the InfoRx app.

Neurology resources include handouts and videos covering Alzheimer's disease, epilepsy, MS, stroke and other neurological conditions. Sources include the Centers for Disease Control and Prevention (CDC), National Institute of Neurological Disorders and Stroke (NINDSS), and links to the American Academy of Neurology (AAN). Physician users can control which titles are delivered to their patients and can customize the InfoRx app with their own patient education handouts. 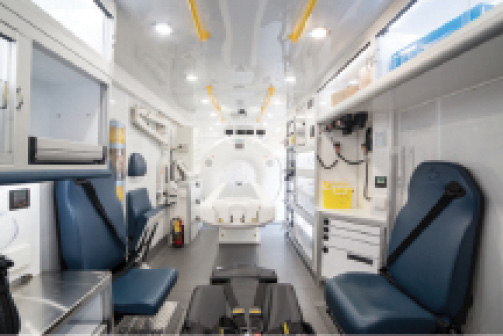 With extensive CT capabilities available in a mobile setting, physicians can diagnose and launch treatment, including tissue plasminogen activator (tPA) treatment and the potent blood pressure drug nicardipine within the critical first hour timeframe. They can also select patients for endovascular interventions, neurosurgery, and neuro-critical care directly from the pre-hospital arena. The unit also features an internal power source capable of matching regular electrical outlet access, a staff with stroke fellowship-trained, doctorally-prepared nurses certified as advanced neurovascular practitioners, ANVP-BC, and the ability to transport trainees and researchers interested in building the science of early stroke management.

“We have a tremendous burden of stroke in Shelby County, with a stroke rate per 100,000 population that is 37 percent higher than the national average,” said David Stern MD, the Robert Kaplan Executive Dean and Vice-Chancellor for Clinical Affairs for The University of Tennessee College of Medicine and The University of Tennessee Health Science Center. “The goal of the Mobile Stroke Unit is to minimize morbidity and mortality, to have more patients walk out of the hospital fully functional. Time is everything for stroke treatment; the quicker we are able to assess and attend to a patient, the better his or her chances are for recovery.”

The UT Mobile Stroke Unit is funded through a public-private collaboration for which more than $3 million has been raised, which will enable operation for up to three years. The Unit will operate 12 hours a day, one week on and one week off beginning this month.

Neuro Assessment Systems, Inc. and the Mayo clinic are set to collaborate on studying a new system for the assessment of central nervous system (CNS) changes associated with concussion, TBI, aging-related events, and the effectiveness of pharmaceutical agents.

The NeuroScreen system is a proprietary hardware and automated software system that detects individual brain function differences in order to monitor changes in CNS function that are critical to diagnosis and treatment of a variety of brain health issues. It uses non-invasive electroencephalogram (EEG) measurements to extract event-related potentials (ERPs), which are obtained by repeatedly stimulating the brain with a specific task and measuring the brain's response to obtain a stable measure. This provides a snapshot of how the brain processes information during the task, allowing for the evaluation of multiple brain health issues that were previously undetectable. Subsequent testing allows the system to assess changes in the way the brain is processing the same task and can provide critical information to physicians about injury and recovery.

Orchid Pharma Ltd. has received final approval from the FDA for its ANDA (Abbreviated New Drug Application) for Rasagiline Tablets 0.5mg and 1mg. This product is a FTF (First-to-file) application with a shared 180-day exclusivity for Orchid. The company expects to launch generic rasagiline tablets in Q4 of FY 16-17. Rasagiline Mesylate Tablets are indicated for the treatment of the signs and symptoms of idiopathic Parkinson's disease.

The FDA has approved Medtronic Specify SureScan MRI Surgical Leads for use as part of Medtronic implanted neurostimulation systems for chronic pain. In 2013, Medtronic introduced the only implantable neurostimulation (also known as spinal cord stimulation) systems for use in the treatment of chronic, intractable back and/or limb pain that are FDA approved for full-body MRI scans under specified conditions. The approval of SpecifySureScan MRI surgical leads means that physicians can now offer a Medtronic full-body MR Conditional SCS system best suited for their patients regardless of the type of neurostimulator (rechargeable or non-rechargeable) or lead type (percutaneous or surgical), according to the company. The leads are available now.

Immune Cells in Brain May Play a Role in ALS

Researchers have identified immune cells in the brain that may play a direct role in the development of amyotrophic lateral sclerosis (ALS), potentially offering hope for new therapies to target the disease (Science, March 18, 2016). The investigators developed two genetic strains in mice lacking the gene C9orf72, which they found is important for the function of the immune system in the brain. Instead of developing ALS, mice without the gene unexpectedly suffered immune system abnormalities. Lysosomes that normally dispose of unwanted cellular material stopped functioning properly without the C9orf72 gene. n