A decreased sense of smell could be an early symptom of Alzheimer’s disease, new findings suggest. In a study recently published in JAMA Neurology (November 16), researchers administered the Brief Smell Identification Test (B-SIT) in 1,630 participants with normal cognition, MCI (amnestic MCI [aMCI] and nonamnestic MCI [naMCI), and dementia to assess olfactory function. They found an association between decreasing olfactory identification and an increased risk of aMCI but no association was found with naMCI. There were 64 incident dementia cases among 221 prevalent MCI cases. The B-SIT score also predicted progression from aMCI to AD dementia, with a significant dose-response with worsening B-SIT quartiles. After adjusting for key predictors of MCI risk, B-SIT (as a continuous measure) remained a significant predictor of MCI and improved the model concordance, according to investigators. They also observed that olfactory tests have potential utility for screening for MCI and MCI that is likely to progress.

Abnormal angiogenesis may be important in Parkinson’s disease pathogenesis and contribute to dopa-resistant symptoms, according to new research. In a cross-sectional analysis published in Neurology, researchers analyzed CSF samples in 38 elderly controls and 100 patients with PD (82 without dementia and 18 with dementia) from the prospective Swedish BioFinder study. Specifically, they assessed the samples for the angiogenesis biomarkers vascular endothelial growth factor (VEGF), its receptors (VEGFR-1 and VEGFR-2), placental growth factor (PlGF), angiopoietin 2 (Ang2), and interleukin-8, among other variables. They found that patients with PD without dementia displayed higher CSF levels of VEGF, PlGF, and sVEGFR-2, and lower levels of Ang2, compared to controls. They made similar observations in alterations in VEGF, PlGF, and Ang2 levels in patients with PD with dementia. Angiogenesis markers were associated with gait difficulties and orthostatic hypotension as well as with more pronounced BBB permeability, WMLs, and CMB. Moreover, higher levels of VEGF and PlGF levels were associated with increased CSF levels of neurofilament light (a marker of neurodegeneration) and monocyte chemotactic protein-1 (a marker of glial activation).

A new study that will examine the usefulness of brain PET scans in dementia has opened registration for specialists. Scheduled to begin next year, the Imaging Dementia — Evidence for Amyloid Scanning (IDEAS) study is designed to determine the value of a brain PET scan that detect the hallmark brain amyloid accumulation of Alzheimer’s disease in diagnosing and managing treatment for people with mild cognitive impairment (MCI) or dementia where the cause is uncertain. The study is a joint effort by the Alzheimer’s Association and managed by the American College of Radiology (ACR) and American College of Radiology Imaging Network (ACRIN). Individuals. The Centers for Medicare & Medicaid Services (CMS) will provide reimbursement to participating PET facilities for the costs associated with the PET scans. Individuals who met these requirements are eligible for enrollment in the study. Physicians interested in becoming referring physicians for the IDEAS study, as well as and PET facilities that would like to join the study as imaging sites, can apply at www.Ideas-Study.org.

The FDA granted accelerated approval to Praxbind (idarucizumab, Boehringer Ingelheim) for use in patients who are taking the anticoagulant Pradaxa (dabigatran) during emergency situations when there is a need to reverse Pradaxa’s blood-thinning effects. Praxbind is a solution for intravenous injection and is the first reversal agent approved specifically for Pradaxa and works by binding to the drug compound to neutralize its effect. The safety and effectiveness of Praxbind were studied in three trials involving a total of 283 healthy volunteers taking Pradaxa (i.e., people who did not require an anticoagulant). In the healthy volunteers who were given Praxbind, there was an immediate reduction in the amount of Pradaxa in participants’ blood (measured as unbound dabigatran plasma concentration) that lasted for a period of at least 24 hours. In this study, the most common side effect from use of Praxbind was headache. Pradaxa was approved in 2010 to prevent stroke and systemic blood clots in patients with atrial fibrillation, as well as for the treatment and prevention of deep venous thrombosis and pulmonary embolism.

The numerous purported health benefits of dark chocolate may also encompass the brain, new research suggests. In a study presented at the recent Annual Meeting of the Society for Neuroscience (SFN) in Chicago, investigators from Loma Linda University found that absorbed cocoa flavonoids penetrate and accumulate in the brain regions associated with learning and memory. Additionally, shared properties of nerves and these cocoa flavonoids sequence the appearance of nerve-altering and protective proteins that promote nerve cell growth, increased brain function and brain communication, blood flow improvement, and the formation of blood vessels in the brain and sensory systems. According to the investigators, the study provides unbiased evidence that (EEG) gamma wave band frequency is started by different cacao sensory awareness tasks ranging from prior conditioned experience to acute cacao consumption, with later modulation for brain, behavioral, and physiological benefits. Further studies are underway.

Results from a recent Phase 3 study indicate that once-monthly, investigational Zinbryta (daclizumab high-yield process [HYP]) is effective for patients with relapsing-remitting MS (RRMS) compared to interferon beta-1a 30 mcg intramuscular (IM) injection. In a post-hoc analyses, Zinbryta was shown to increase the percentage of patients achieving no evidence of clinical and MRI disease activity, improve cognitive processing speed, and reduce 24-week confirmed disability progression across a broad range of subgroups at two years, compared to interferon beta-1a IM. The findings were published in The New England Journal of Medicine and were presented at the 31st Congress of the European Committee for Treatment and Research in MS (ECTRIMS) in Barcelona, Spain.

Absorbable Antibacterial Envelope Now Available for Use with Implantable Neurostimulators 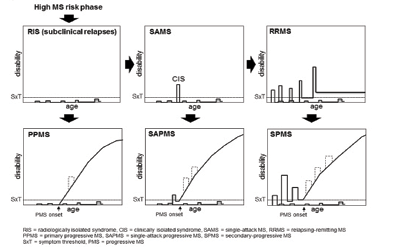 Phases and phenotypes of Multiple Sclerosis.

In the article entitled “Promising Directions in Relapse-Impact Prevention in Multiple Sclerosis” appearing in October 2015 edition of Practical Neurology®, Figure 1 (“Phases and Phenotypes of Multiple Sclerosis) contained an incorrect graphic. Specifically, a bar in one of the slides meant to depict Clinically Isolated Syndrome was missing. For correct data, see the accompanying corrected graphic (right).

The Video Case Solution (entitled “Kearns-Sayre Syndrome”) appearing in the July/August edition contained an incorrect spelling of “Kearns-Sayre Syndrome.” In addition, the answer was incorrectly listed as “4. A point mutation in the mitochondrial genome.” The correct answer was “1. A large mitochondrial deletion in muscle tissue.” The article indicated that muscle biopsy showed “a ragged red fiber.” This has been corrected to “many ragged red fibers.”

All changes are reflected on PracticalNeurology.com.

New findings suggest that male and female brains may not be as different as previously thought. While the hippocampus was widely believed to be larger in females than in males, a new study published in NeuroImage (2016; 124: 350) refutes this notion. Results from the meta-analysis suggest that while men exhibit a larger hippocampal volume than females, there is no reliable difference when adjusting for total brain volume and intracranial volume.

Ocrelizumab and the Next Phase in Multiple Sclerosis Therapy