Out With the Old, In With (Mostly) the Old

Recent changes to the acute migraine guidelines were more subtle than sweeping.

If guidelines serve as a clinician’s GPS to treatment, the American Headache Society’s effort to find best practices in acute migraine therapy involve a good deal of looking in the rearview mirror

“I think it reinforced the old guidelines, but just as importantly it showed that there’s good evidence that these drugs work,” said Stephen Silberstein, MD, FACP of Jefferson University Hospitals, and one of the authors of the update to the 2000 guidelines by the American Academy of Neurology. “Some of the newer drugs in combination work. We have evidence, for example, for the new DHE inhaled product, for the sumatriptan patch, and for new formulations of non-steroidals,” he said.

But, he added, “I think it’s important to realize there’s nothing really new. There was no new major class of medication.”

While there are indeed new formulations of older drugs, Dr. Silberstein said the disappointing news is that they found less research on new drugs in the last 10 years than the previous 10-year period. “The 10 years before was the age of all the new triptans. Things are now being developed, but at the time we did the literature search there was absolutely nothing really new.”

Specifically, researchers found no new Class I or II studies published since the most recent guidelines for butorphanol (intramuscular or nasal spray), combinations of butalbital/aspirin/caffeine or butalbital/aspirin/caffeine/codeine, acetaminophen/codeine, dihydroergotamine (DHE) (nasal spray, intramuscular, or intravenous), flurbiprofen, hydrocortisone, isometheptene, intranasal lidocaine, and meperidine. When no new review of previous studies was done, researchers assigned levels of evidence for these agents based on the 2000 AAN guidelines. Medical devices were excluded from their search.

Triptans again show strong evidence for effective treatment of acute migraine. The three triptans approved since the release of the previous guidelines—almotriptan, eletriptan, frovatriptan—have been added to the list of effective treatments, along with the combination of sumatriptan and naproxen.1 These medications join naratriptan, rizatriptan, sumatriptan, and zolmitriptan, which the 2000 guidelines found effective.

A Class I study of patients with non-incapacitating migraine raised oral acetaminophen to Level A from Level B. The study revealed acetaminophen produced higher two-hour headache-free rates than placebo.

Based on four Class I studies, researchers also lifted diclofenac to Level A from Level B. The primary outcome of one was two-hour headache intensity using a visual analog scale where 100 was maximal headache. Both diclofenac 50mg and 100mg were superior to placebo (22 average with 100mg, 26 with 50mg, and 46 with placebo; P < .001).

No high quality studies have been conducted on the combination therapy acetaminophen/aspirin/caffeine, and it retains its Level A rank.

There was no movement from the previous guidelines for ergotamine/caffeine and intravenous, intramuscular, or subcutaneous dihydroergotamine.

Droperidol was added to the level after a Class I 2003 study showed the drug provided superior rates of two-hour headache relief compared with placebo. Subjects were randomized to receive injections of 0.1mg, 2.75mg, 5.5mg, and 8.25mg or placebo for treatment of moderate to severe migraine. Two-hour headache relief rates were superior for subjects receiving 2.75 mg (87 percent), 5.5 mg (81 percent), and 8.25 mg (85 percent) compared with placebo (57 percent). Headache relief from droperidol was superior to placebo as early as one hour for the 2.75mg dose, 90 minutes for the 5.5mg dose, and 30 minutes for the 8.25mg dose.

The other anti-emetics used to treat migraine—chlorpromazine, metoclopramide, and prochlorperazine—also remain “probably effective” on the strength of the 2000 guidelines.1

There is Level B evidence about the effectiveness of the NSAIDs ketoprofen, ketorolac IV and IM (though not the intranasal formulation), and flurbiprofen. There were no new Class I or II studies published on flurbiprofen or isometheptene since the most recent guidelines. There were, however, two Class II studies that demonstrated intravenous magnesium sulfate provided significantly better relief than placebo. 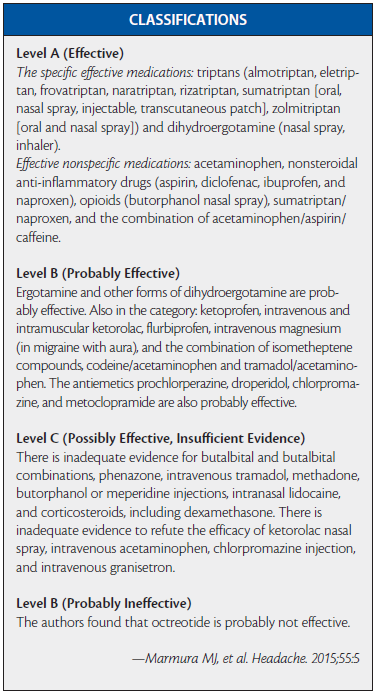 The researchers conducted a systematic review of clinical trials on the efficacy of acute migraine treatments vs. placebo, published in medical journals between 1998 and 2013. Two study authors reviewed each research abstract identified in a formal literature search and determined whether the full manuscript qualified for review.

Two independent reviewers then reviewed each of the selected manuscripts to determine whether it met study inclusion criteria. In the event of a disagreement between the two reviewers, a third member reviewed the abstract or manuscript and served as a “tie breaker.” Each selected study was rated on a number of factors that reflected study rigor and significance, as well as findings. The authors’ original research identified 805 articles, of which 132 were selected for review.

Based on these ratings, each class of drugs was deemed effective (Level A), probably effective (Level B), possibly effective (Level C), or judged to have inadequate or conflicting evidence to support or refute the medications’ use (Level U). The determination of each efficacy level was also based on the rigor and quantity of published studies on the drug class: to be in Level A, for example, a class of drugs must have been supported by at least two “Class I” studies—well-designed, double-blind, randomized, placebo-controlled clinical trials.

“Essentially what we did is show what the evidence is for drugs used for acute treatment of migraine,” Dr. Silberstein said. “We didn’t talk about side effects or risks in general. Basically we said ‘all these drugs are effective’ but we really didn’t say when to use them, how to use them, or which drug you should choose over the other.”

To fill that gap is a forthcoming companion piece to confront those issues. For example, opioids require special consideration. “Not because they’re not effective, but the risk of using them frequently can lead to many problems,” Dr. Silberstein said. n